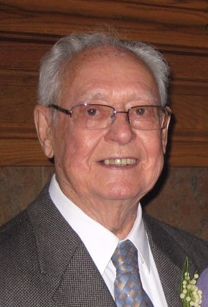 Age 93, and a lifetime resident of Kimberly, passed away at St. Paul Home in Kaukauna on Thursday, March 22, 2018 with his family by his side. Tony was born on November 26, 1924, in Kimberly, Wisconsin to the late Cornelious and Johanna (Van Boekel) Van Hout. Tony attended Kimberly High School. On his 18th birthday, Tony enlisted in the U.S. Navy and was sent to San Diego for trade school, and graduated as a Machinist’s Mate. Tony was stationed aboard the USS Millicoma, and spent three years in the South Pacific refueling the Navy Fleet. Upon his honorable discharge from the Navy in 1946, he married Verna Lambert on October 26, 1946, in Kimberly. Tony was proud to have served his country in the U. S. Navy.

Tony is preceded in death by his wife of 69 years, Verna, his parents and his siblings: William, Joseph, Frank, Lambert, Martin, James, Francis, Cora, and Mary.

The Funeral Liturgy will be at 11:00 AM on Tuesday March 27th, at HOLY SPIRIT/HOLY NAME CATHOLIC CHURCH, 600 E. Kimberly Avenue, Kimberly, with Monsignor James Vanden Hogen officiating. Friends may call at the Jansen Fargo Funeral Home, 204 East Kimberly Avenue, Kimberly, on Monday from 3:00 PM to 7:00 PM, with a 7:00 PM prayer service, and at the church on Tuesday from 10:00 AM until the time of services. Interment will be in Holy Name Cemetery, Kimberly.