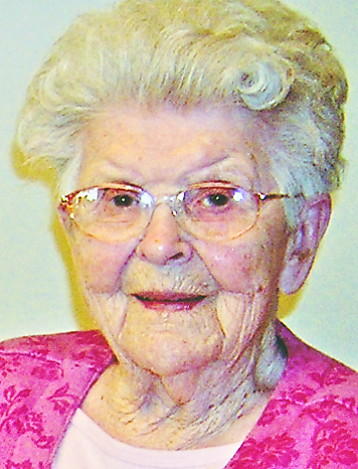 Anna Marie Roeland, age 101, of Appleton, passed away on Friday, April 20, 2012 at Appleton Health Care Center. She was born on June 11, 1910 in Mackville, the oldest child of Andrew and Catherine (Klein) Gengler. Anna married John Roeland at Sacred Heart Catholic Church in Appleton on June 14, 1937. They shared 49 years together before his death in 1986.
Anna was employed at Kimberly Clark from 1930 until 1940 and at Lawrence University from 1952 until 1975. After her retirement, she volunteered at St. Elizabeth Hospital for many years. Anna was a very strong and independent woman and was able to remain in her home until she was over 100 years old with help from family, friends, and neighbors. She was a member of Sacred Heart Catholic Church in Appleton.

The funeral liturgy for Anna will be held at 11:00 am on Tuesday, April 24, 2012 at SACRED HEART CATHOLIC CHURCH, 222 E. Fremont Street, Appleton. Fr. Tony Ibekwe will be officiating. Burial will take place at St. Joseph Catholic Cemetery. A visitation will be held at the church on Tuesday from 9:30 am until the time of mass.

The family would like to thank Anna's caregivers and friends at Appleton Health Care Center and ThedaCare Hospice for their kindness and compassion.