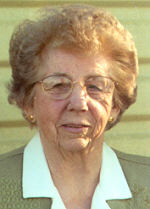 Age 89, passed away on Wednesday, June 25, 2008 after nearly three years at Lakeview Manor in Weyauwega as she struggled with Alzheimer's disease. She was born on May 16, 1919 in Kessel, Holland to Adrian and Henrietta (Vander Heyden) Van Venrooy. She immigrated to the United States as a one year old; later, she became a citizen and subsequently shortened her name to “Van Rooy.” On May 12, 1941, she married Edward Kieffer and farmed for many years in the Town of Kaukauna. In 1991, they celebrated 50 years of marriage, with her nephew Fr. Gene Gries officiating. After Ed's retirement and before he passed away on January 2, 1999, he and Ann traveled extensively.

She maintained a garden for many years and loved to give away her fruits and vegetables during season. What she didn't give away, she canned. Many relatives, friends and neighbors were recipients of her intricate crocheted doilies and beautiful, multi-colored afghans. She just never had too much yarn!

She and her husband were life-long members of Holy Cross Catholic Church in Kaukauna, where they were wed.

In addition to her husband and parents, she was preceded in death by all four brothers: Lambert Van Roy, William Van Rooy, Martin Ven Rooy, and John Van Rooy; sisters-in-law: Betty Cortes and Rosalie Van Rooy; and many of her husband's siblings.

The funeral liturgy will be at 11:00 a.m. on Friday, June 27, 2008 at HOLY CROSS CATHOLIC CHURCH, 309 Desnoyer St., Kaukauna. Friends will be received at the church on Friday from 9:00 a.m. until the time of the service. Burial will be in Holy Cross Cemetery, Kaukauna.

Thanks to all who assisted her as she struggled through her later years and helped her remember when she could not, especially: neighbors Earl and Dolly Verhasselt, sister-in-law Minnie Ven Rooy and niece Elaine Ven Rooy. Also thank you to the caregivers at Lakeview Manor who took her under their wing, Home Instead Senior Care, and the caregivers at Hospice.