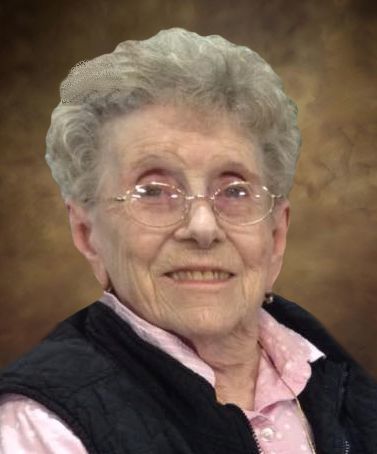 The heart of our family has stopped beating. Our beautiful mother, Anna Jannette, passed away peacefully in to Jesus' arms on Wednesday, March 15, 2017, at St. Paul Elder Services at the age of 96. She was born on August 8, 1920, in Wrightstown, the eleventh of thirteen children to Martin and Mary (Nelessen) Nackers. They were a hard-working farm family who survived the depression with strong family values and Catholic beliefs. She was very proud of being class president and prom queen. Along with her sister, Mary, they blended their beautiful voices and became the “Two Little Maids”, performing for weddings, parties, with the Lawrence Duchow Polka Band, and live on the radio on Sunday afternoons. Before her marriage, she worked as a nurses' aide at St. Elizabeth Hospital. On August 8, 1940, her 20th birthday, she married our wonderful father, Ernest, at St. Paul's Church in Wrightstown. He absolutely adored her and they were devoted to each other for nearly 60 years, until his passing on July 1, 2000. The first three years of their marriage they lived upstairs at her parents' and then moved to the Kelly farm before moving to Kaukauna in 1945. Mom stayed home to care for their growing family. She had her fifth child before the oldest had turned six. Gardening, canning, sewing, cooking, cleaning, baking, and her devotion to her faith were her driving forces. The kitchen was always full of the aroma of her homemade buns and cinnamon rolls. But she always found the time to continue enjoying and sharing her love of music, either around the piano or with the guitar. And, of course, we prayed the rosary each night after supper.

Words cannot describe the unconditional love in our home. She became a grandmother for the first time in 1966, and was excited and happy to see the family circle continue to grow with each addition. With her family growing up, she went back to work as a nurses' aide at the Kaukauna Hospital, until her son Denis was paralyzed in a car accident. It was then that she quit to take care of him. She became involved in singing for the Queen of Peace Choir at Holy Cross Church where she also served as a Eucharistic Minister. She also belonged to the Knights of Columbus Auxiliary and the Kaukauna Hobby Club. Volunteering for Elizabeth Ministry, Mother and Unborn Baby Care, St. Paul Home, and the former Parkside Care Center were all things she enjoyed doing. Eventually, Mom and Dad found time to travel with friends and family, and for a time had a vacation spot on Boulder Lake. But simple things were the best. A plate of fish on a Friday night, dancing at weddings, a competitive game of cards, and just being with family and friends were all times that she treasured. She always enjoyed reading and crocheting – her creations will be cherished by us all. After her health declined and she entered the nursing home, she filled many hours making potholders. Over 100 were recently sent to Haiti to be used by the people there for cooking over the fire.

The funeral liturgy for Anna Jane will be held at 11:00 AM on Tuesday, March 21, 2017 at Holy Cross Catholic Church, 309 Desnoyer Street in Kaukauna. Fr. Thomas Pomeroy will officiate and will be assisted by Deacon Steve Vande Hey. Interment will follow in the parish cemetery. Family and friends are invited to gather at the Fargo Funeral Home, 400 W. Wisconsin Avenue in Kaukauna on Monday from 4:00 PM until the time of the prayer service at 7:00 PM. Visitation will resume at Holy Cross Church on Tuesday morning from 9:00 AM until 10:45 AM.

We feel so privileged to have had such an amazing and inspirational mother who taught us the power of prayer, love, and determination, and to be thankful for each day and the gifts that it brings. Please, Mom, let our heavenly family know how much we love and miss them. We love you forever, Mom.

The family would like to extend a special thank you to St. Paul Elder Services and the staff on Birch Lane for the loving care they gave Mom for the past seven years. Also thanks to St. Paul Hospice for everything they have done in these final few days. Your kindness will not be forgotten.