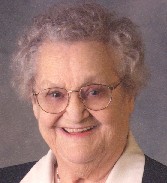 Age 86, passed away Wednesday, February 09, 2005 at St. Paul Elder Services in Kaukauna. Ann was born in Little Chute on June 29, 1918, daughter of the late Jacob and Henrietta (Verhoven) Van Wymeren. On May 20, 1941 she married Norbert Driessen; Norb preceded her in death in 2002. As a young woman, Ann worked at Gloudeman‚Äôs Department Store in Appleton as well as a teacher‚Äôs aide in the Kaukauna schools. She was an avid bridge player, and enjoyed teaching the game to others. Ann was also an active member at Holy Cross Church, and enjoyed sewing and reading.

The funeral liturgy for Ann will be held at 9:30 AM on Saturday, February 12, 2005 at HOLY CROSS CATHOLIC CHURCH, 309 Desnoyer Street in Kaukauna with Fr. Jack Mullarkey officiating. Interment will be in the parish cemetery. Friends may call at the funeral home on Friday from 4 ‚Äì 7 PM and again Saturday at the church after 9:00 AM.