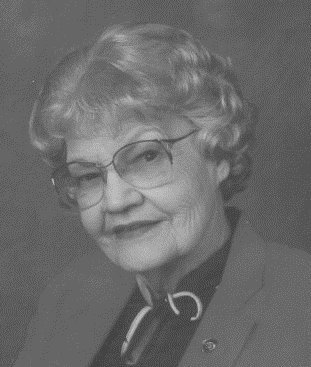 Ann Catherine King, 95, entered heaven to join her husband, Leo, on January 12, 2015 at St. Paul Home in Kaukauna, where she lived for almost seven years. She was born on October 5, 1919, in Askeaton, Wisconsin, to Joseph and Katerina Lingl. Her parents came to America in the early 1900's from what is now Croatia. When Ann started school in Kaukauna, she couldn't speak English, but thankfully, the nuns at Holy Cross spoke both German and English.

Ann loved school and was a true life-long learner. In high school she learned sewing, embroidery, and cooking “American style.” Her tall stature made her a natural on the girls' basketball team. Later, she took up knitting and even learned how to reupholster furniture. She had a green thumb that kept her home full of plants and her yard full of flowers all summer. Her love of poetry inspired another talent later in life, as she wrote many uplifting poems that revealed her empathetic heart and her strong faith in God.

In 1942, Ann married the love of her life, Leo King, and they were blessed with three children. Early in their marriage Leo was drafted into the army, and when the paper mills were short of men, Ann went to work at Thilmany. While there she learned a colorful vocabulary that sometimes snuck out years later. She enjoyed working at King's Variety Store in Little Chute for many years. Then she became a demo lady at Larry's Piggly Wiggly in Kaukauna. Working in retail suited her well because she loved helping people.

The funeral liturgy for Grannie Annie will be held at 4:00 PM on Friday, January 16, 2015 at HOLY CROSS CATHOLIC CHURCH, 309 Desnoyer Street in Kaukauna, with Fr. Thomas Pomeroy officiating. Inurnment will take place in the parish cemetery. Friends and relatives are invited to gather at the church on Friday afternoon from 2:00 PM until the time of the service. Online condolences may be offered by visiting www.wichmannfargo.com.

Mom often said, if God gives you a gift, He expects you to share it with others. She was happiest when she was able to do that. The parishioners of Holy Cross enjoyed the desserts Mom brought for fellowship Sundays, and the members of her Monte Alverno bible study loved her cream puffs. Through the years, we were blessed with handcrafted clothes, sweaters, and afghans, homemade cookies, pies, tortes, palatchinkas, tomato kraut, stuffed peppers, and especially the “heath candy” she made every Christmas.

Mom was a member of The Cross and The Crown prayer group. She taught us how to love God and one another. Her heritage to us isn't possessions, but the priceless, unspoken treasure of her example as a loving mother and a strong, faith filled woman. Alzheimer's may have stolen many of Mom's memories, but it couldn't take away her sparkling spirit or her loving soul. She was always thinking about her next adventure. We can picture her at heaven's gate with her sweet smile and a twinkle in her eyes saying “Ready or not, here I come.”

We extend special thanks to the angels without wings at St. Paul Home who tenderly cared for Mom with such loving compassion and kindness. Their beautiful smiles and hugs brought Mom so many precious moments of joy. They became more than friends; they were family to us until God's heavenly angels came to escort Mom home.