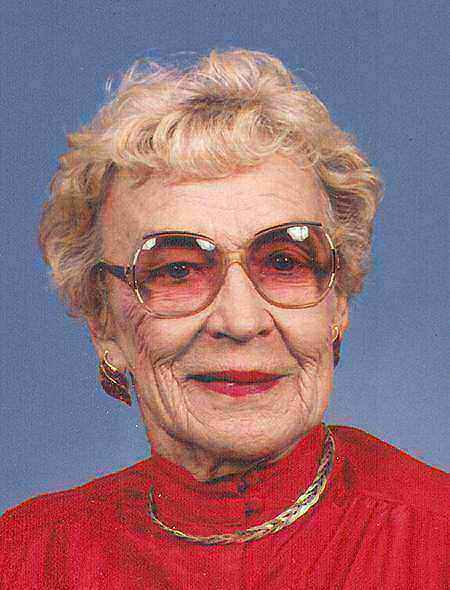 Anita A. Tackett
Age 92
Of Appleton, passed away on Thursday, May 20, 2004 at Franciscan Care in Appleton. She was born on May 6, 1912 in Marathon, Wisconsin, the daughter of the late Jacob and Pearl (Divine) Mears. Anita married Ken Tackett on November 31, 1953. He preceded her in death in August 1976.
Anita was devoted to her daughter, grandchildren and great-grandchildren. She is survived by her daughter and son-in-law Kathy and Bob Hietpas, three grandchildren: Mike (Deanna) Hietpas, Julie (Rick) Reader, Mark (Colleen) Hietpas and great-grandchildren McKenna and Zach Hietpas, Emma, Matthew and Joey Reader and Dawson, Dylan and Chloe Hietpas. She is also survived by her sister and brother-in-law, Bernice and Ed Cich, her sister Gladys Stojakovic and sister-in-law, Dorothy (Pete) Mears and several nieces and nephews. She was preceded in death by her parents, her husband, Ken, her grandson Jeffrey Hietpas, two brothers Jay Mears and DuWayne Mears, her sisters and brother-in-laws Veronica and Grant Miller, Marion and Bob Sellers and Pearle and Bill Winius and her brother-in-law Marvin Stojakovic.
A Memorial Mass will be held on Wednesday, May 26, 2004 at 5:00 PM at St. Paul‚Äôs Catholic Church (410 E. Wallace St.) Combined Locks with the Reverend Robert Vandenberg officiating. Friends may call at the church one hour prior to the mass.
In lieu of flowers a memorial fund is being established in Anita‚Äôs name.
The family would like to express their gratitude to the staff at Franciscan Care and Dr. Robert Fox for their loving and compassionate care of Anita over the past two years. A special thank you to Father Vandenberg and the staff at St. Paul‚Äôs Church and Dean Fox for their friendship and support to Anita.

‚ÄúYou were my mother and my friend;
Which was unusual.
Somehow our characters still blend:
Your wisdom and my will.

I turned and you were there for me;
I spoke, you understood.
I felt cared for but also free;
You loved and I was good.

I‚Äôm fortunate that I was born
To someone just like you;
I love you still. Though you are gone.
You live in what I do‚Äù
Nicolas Gordon