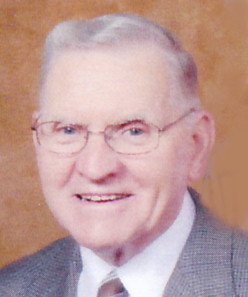 Andrew Pockat, age 88, of Appleton, passed away peacefully on Sunday, August 4, 2013 at his home. Andrew was born on October 2, 1924 in the Shawano County township of Grant, near Marion, son of the late Ernest and Olga (Peterman) Pockat. On October 17, 1953 he married Lois Radke. Together the couple had two children, Randall and Marsha. During these years, Andrew was a member of St. John's Lutheran Church in Marion where he served as an usher, the Men's Club, and also played dartball. He loved being a farmer and he and Lois fostered many foster children in addition to their own. Lois preceded him in death on July 22, 1996. Andrew married Lorraine Dieck on June 6, 1998, also at St. John's Church in Marion. Together, they enjoyed delivering Meals on Wheels in Marion. The couple moved to Appleton and then joined Faith Lutheran Church where he enjoyed their TLC group, bible study. He also enjoyed breakfast with friends after church, as well as polka dancing, and watching Packer and Badger games.

A memorial service for Andrew will be held at 11:00 AM on Wednesday, August 7, 2013 at FAITH LUTHERAN CHURCH, 601 E. Glendale Avenue in Appleton, with Rev. James Wiebel officiating. Burial will take place at Greenleaf Cemetery in Marion. Friends may call at the church on Wednesday morning from 9:00 AM until the time of the memorial. Online condolences may be offered at www.wichmannfargo.com.

In lieu of flowers, the family has suggested that memorials be directed to Faith Lutheran Church's Radio Ministry or Faith's “Feed My Starving Children” Program.

The family would like to thank ThedaCare at Home and Patti Green for their love and concern.