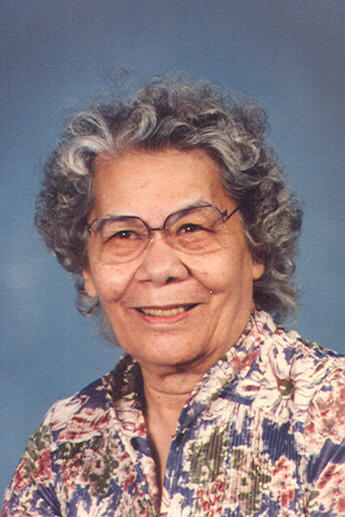 Ana Smith, was lifted up to Heaven Sunday, May 17, 2009. She was born on March 12, 1919 in Hagatna Guam, Familian “Dódó”, to the late Jose M. Mesa and Carmen Pangalinan Mendiola Mesa of Hagatna Guam. On October 30, 1950 she married Dean Smith in Guam. Ana was a member of Auxiliary DAV Chapter 18 and Sacred Heart Catholic Church. Until a couple of years ago, she was still active with gardening and snow removal at her home.

The funeral liturgy for Ana will be held at 11:00 am on Saturday, May 23, 2009 at SACRED HEART CATHOLIC CHURCH, 222 E. Fremont Street, Appleton. Father Robert Karuhn will be officiating. Burial will take place at St. Joseph Catholic Cemetery, Appleton. A time of visitation and support will be held on Friday at the Wichmann Funeral Home Downtown Chapel from 4:00 pm until the time of the Rosary Service at 7:00 pm and again at the church on Saturday from 10:00 am until the time of mass.

A special thank you to her doctors, Theresa Lee, Stephen Brown and Greg Swanson of Affinity and St. Elizabeth Hospital. We will always be grateful for the wonderful care she received at Heartwood Homes and Manor Care in Appleton. Thank you to Heartland Hospice also.