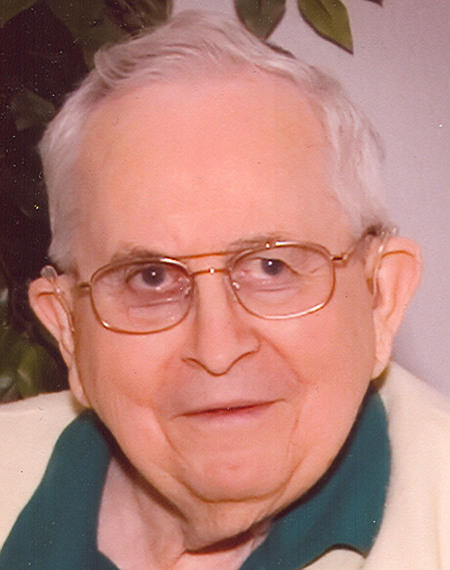 Amond R. “Ralph” Ballinger, age 84, of Appleton, died Sunday evening, March 2, 2008. He was born on Easter Sunday, April 20, 1924, to the late George A. and Frances Irene (Hannah) Ballinger, in Detroit, MI. Ralph entered school in 1930 and left school in 1942 to attend Signal Corps Civil Service Radio School, in Livingston AL, joining the Signal Corps Reserve. Ralph entered active duty on January 17, 1943 at Camp Shelby, MS. After basic training at Camp Crowder, MO, he was sent to Coyne Electrical School in Chicago for Radio Repair School. Following graduation he was transferred to Drew Field, Tampa, FL. Ralph was sent overseas in October 1943 and arrived in Scotland in November. He was assigned to the 904th Signal CO. of the 2nd Strategies Aid Dept. of the Mighty 8th Air Force. At the conclusion of the European War he returned to the U. S. for shipment to the Pacific. Japan's surrender cancelled this shipment. Ralph was discharged November 16, 1945 at Maxwell Field, AL. Returning to civilian life, Ralph, entered Mississippi State College. In 1947 he moved to Milwaukee at attend college, but took a job as a telephone central office equipment installer with Western Electric Company. After a year of employment, Ralph, returned to college. While working in Appleton, Ralph, met Marge Krueger at a young single adults gathering at the Methodist Church. After graduation from the University of Wisconsin-Stout, Ralph was employed by the Department of Defense in quality assurance work for 28 ½ years retiring as a quality assurance specialist, rotating electrical machinery. Ralph and Marge were married in the First United Methodist Church. October 18, 1952. He was preceded in death by his beloved wife on August 6, 2007. Ralph served his church in various groups; House Committee, Board of Trustees, Memorial Committee, Stewardship Committee, Administrative Board and over 25 years as an usher. Ralph served as Secretary-Treasurer of the 904th Signal Co. since the units first reunion in 1961. Ralph and Marge travel to many cities in the U.S. attending reunions. They traveled to the Seattle and New York World Fairs, toured Alaska, travel to England, where the visited an English family, Ralph, met while in service. Ralph was supply officer with Outagamie County Chapter of the American Red Cross for over 12 years. He was a class amateur radio operator, stamp collector, and enjoyed photography while touring and taking pictures of fall colors. He is survived by his sister, Martha (Bill) Nicastro, Brookfield, Ohio; and nieces and nephews. Funeral service for Ralph will be held at 11:00 am, Wednesday, March 5, 2008, at FIRST UNITED METHODIST CHURCH, 325 West Franklin Street, with Dr. Doyle Blanton officiating. Burial will be in Appleton Highland Memorial Park. Friends may call at the church on Wednesday from 10:00 am until the time of the service. A memorial fund is being established for First United Methodist Church.

The family would like to thank ThedaCare at Hospice, especially Lou, Kathy and Sarah and the doctors and staff of Appleton Medical Center, especially Angela, Erin, Kelly, Jess, Se, Ben and Nate, for their loving care and support.

The family would also like to thank his caregivers, Mary Palmbach, Jeanne Miller and Shawn Gretzinger, who spent much time with Ralph.