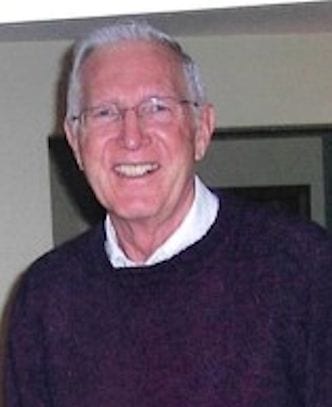 Visitation at the church from 10:00 AM until the time of service.

Alvin T. “Al” Vandenberg, age 78, went to heaven, suddenly on Sunday, March 1,2020. Al was born on December 27th, 1941 to the late Harry and Mary (West) Vandenberg. He was married to his high school sweetheart and the love of his life Beverly J. Jaeger on May 2nd, 1964 at Sacred Heart Catholic Church in Appleton.

Al attended Sacred Heart Grade School, West High School and graduated from UW-Oshkosh in 1965 with a BA in Business Administration. He was a stockholder/treasurer at Gaarder and Miller, which was acquired by Schenck and Associates as a consultant for the healthcare profession. Al served the areas of Central and Eastern Wisconsin for 40 years where he formed close personal relationships with clients.

Al was deeply devoted to family, faith and community. His gentle, caring, loving, sensitive, compassionate heart will be remembered by all. Al was active on the Parish Council at St Bernadette (40 years), an original member of Fox Valley Bible Study for 43 years and a part of the Men’s fellowship sharing group, involved in evangelization, outreach and Cursillos, various small faith groups and attended mass daily.

He will be remembered for his life stories, wisdom (what comes around goes around) and a do it yourselfer attitude. Earning a scholarship to play basketball at UW-Eau Claire he lived an active, adventurous life skiing (all kinds), swimming, sailing (member and audited books for the Long Lake Yacht Club Association) and in later years golfing and playing tennis with the Greater Waupaca Area Netters Organization up until death. He enjoyed the simpler things in life such as fishing, camping, deer hunting, spending time at his cottage on Long Lake Waushara with family and grandchildren for 45 years, taking trips with his wife and two other couples every October and snow birding to TX. He deeply loved his grandchildren and took them on adventures whenever he had the chance.

Visitation at Wichmann Funeral Home Tri County Chapel, 1529 S. Oneida St, Menasha WI, on Friday, March 6th from 4:00 PM to 7:00 PM with a Prayer Service at 7:00 PM. The funeral liturgy for Al will be held at St Bernadette Catholic Church, 2331 E Lourdes Dr, Appleton, WI 54915, on Saturday, March 7th at 11:00 AM with Fr. John Becker officiating. Additional visitation at the church from 10:00 AM until the time of service. In lieu of flowers, a donation on Al’s behalf can be made to Pillars (Homeless Shelter) or St. Bernadette Parish.

Visitation at the church from 10:00 AM until the time of service.