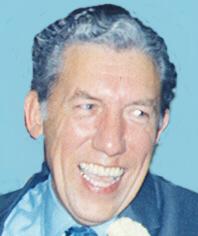 Age 86, passed away peacefully on Thursday, November 22, 2007. He was born May 16, 1921 in Wrightstown to the late Wilhelm and Elizabeth (Kleuskens) Ristow. Alvin attended Green Bay West High School where he graduated in 1941. Alvin then served in the United States Air Force in the Pacific Theatre from 1942 until 1945. He married Ruth Grootemont on October 23, 1945 and they shared 61 years of marriage together. Alvin began his firefighting career in 1953 with the Appleton Fire Department and retired in 1979. He was an avid golfer, fisherman, and hunter and enjoyed watching Wisconsin Badgers and Green Bay Packer games.

Alvin is lovingly survived by his children: Sue Ristow of Milwaukee; Robert (Judy) Ristow of New London; John Ristow and his special friend, Debra George of Crivitz; Rose Fischer of Las Vegas; Mary (Tom) Patza of Seymour; sister: Mildred Carbine of Appleton and brother: Merril Ristow of Florida. . Alvin will also be sadly missed by many grandchildren and great grandchildren. He was preceded in death by his wife, Ruth; and three children: William Ristow, Barbara Verrier and James Ristow.

The funeral liturgy for Alvin will be held at 11:30 a.m., Tuesday, November 27, 2007 at ST. PIUS X CATHOLIC CHURCH, 500 West Marquette Street, with Father Thomas J. Farrell officiating. Friends may call at the church from 9:30 a.m. until the time of service. Interment will be held at 1:30 p.m. at St. Joseph Cemetery.

The family would like to extend a sincere thank you to all the staff at Brewster Village, Dr. Ballard and Carolina Manor for all their care and support of Alvin.