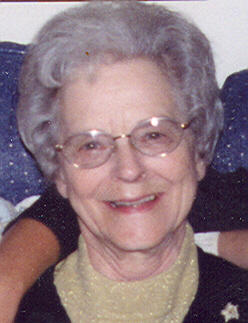 A mother's love is like a rose, always blooming, forever caring, always giving and forever sharing. Surrounded by those who love her, Alvera Angeline (Lorenz) Stoegbauer, age 89, of Appleton, peacefully passed into eternal life at St. Paul Home, Kaukauna on April 11, 2008. Alvera, caring wife, mother, grandmother, great grandmother and sister was born December 12, 1918 in Appleton to the late Theodore and Laura (Weber) Lorenz. She attended St. Joseph Grade School and took classes as a young woman at the Appleton Vocational School.

Alvera was married to Aloysius Herman Stoegbauer on February 22, 1944 at St. Joseph Catholic Church in Appleton, where both had been life members. Al died on March 8, 1981. Alvera worked at Zwicker Knitting Mill and Kimberly-Clark (Atlas Mill).

Alvera was devoted to her family, whether it was her husband, a brother, sister, in-laws or kids. Her love was unconditional. She helped so many during her life, always putting herself last. She always had time for anyone who needed it, befriending even strangers. She was a very proud and patriotic individual, never missing a voting day. You get that way after losing a brother to the Bataan Death March and being married to a husband that was a city alderman for over 25 years. Alvera was a fantastic seamstress and quilter, a fabulous cook and a spotless housekeeper. She enjoyed the large family BBQ's and making dinners for who ever would stop over. She took great pride in her family and home.

The funeral liturgy for Alvera will be held at 10:30 am on Friday, April 18, 2008 at ST. JOSEPH CATHOLIC CHURCH, 410 W. Lawrence Street, Appleton with Fr. Larry Abler officiating. Burial will take place in the parish cemetery. Family and friends may call at the church on Friday from 9:00 am until the time of mass. In lieu of flowers, a memorial fund will be established in her name.

The family wishes to express a deep sense of gratitude and appreciation to the staff at St. Paul Home, especially the caregivers on Poppy Path who took special care of Alvera for these past four years. Also, a special thanks to her childhood friend Kathryn Delrow.

The void left by her passing will never be filled, however, the love, the laughter and the life left behind will never be forgotten. Alzheimer's robbed us of her last years, but it didn't take the memories that we will forever hold in our hearts. Free at last, fly with the angels and be at peace with God.