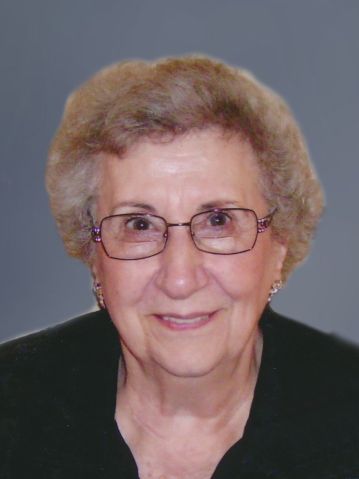 Alvara Oudenhoven, age 90 of Kimberly, was called home to heaven on Friday, December 28, 2018. Alvara was born in Kimberly on October 25, 1928, to the late Adrian “Arthur” and Loretta “Laura” (Weyenberg) De Wildt. In 1949, she married Joseph Oudenhoven; he preceded her in death in 1972. Most of Alvara's life was spent as a homemaker, raising her children. Later in life, she enjoyed her grandchildren and great-grandchildren. She also enjoyed playing cards with family and her lady friends.

She was preceded in death by her parents, her husband Joseph, a brother Kenneth, a grandson Thomas Dufrane, as well as by Joe's siblings: Richard (Arlene) Oudenhoven, Phyllis (Harold) Ott, and Joyce (Merl) Janssen.

The funeral liturgy for Alvara will be held on Saturday, January 5, 2018 at 11:00 AM at Holy Spirit Catholic Church, located at 600 E. Kimberly Avenue in Kimberly, with Fr. Robert Kollath officiating. Family and friends are invited to gather at the church on Saturday from 9:00 AM until the time of the service. Interment will take place at St. John Cemetery in Little Chute at a later date.