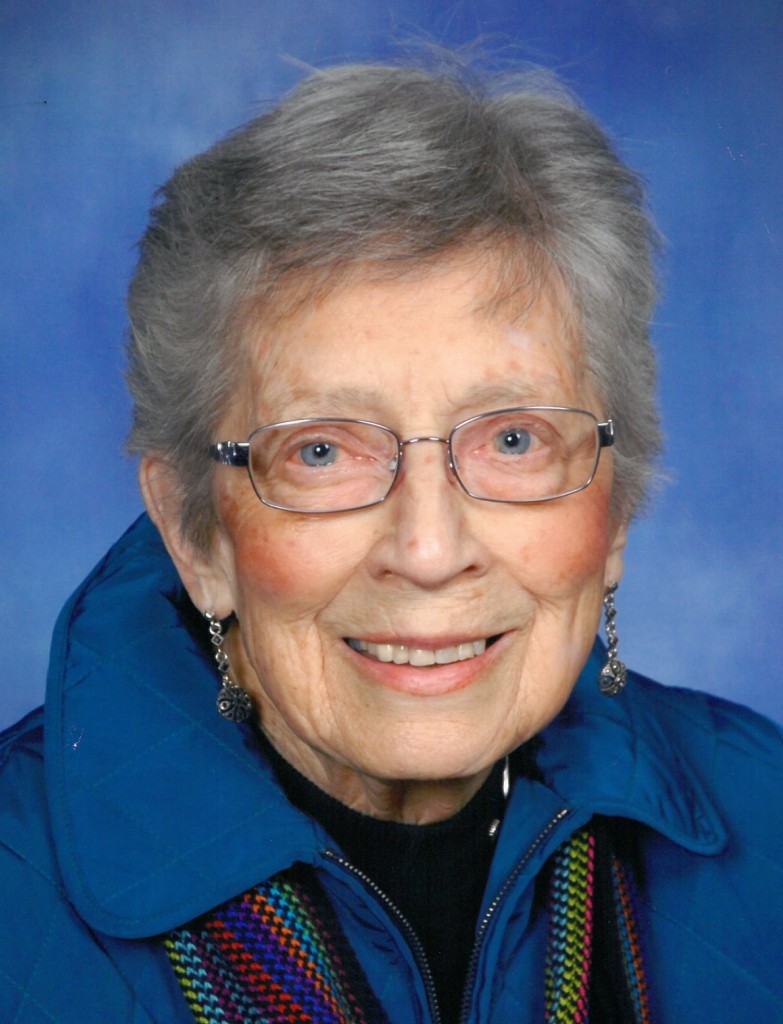 Althea Valentyn, 89, Kimberly, passed peacefully into the loving arms of Jesus on Sunday afternoon August 13, 2017. She went to Jesus from her apartment at the St. Paul Villa surrounded by her family. Althea was born in Kimberly, on February 22, 1928, daughter of the late Anton and Christine (Kamps) Vanden Boom. She was a proud member of the Kimberly High School graduating class of 1946.

On August 6, 1949 she married Bob Valentyn at Holy Name of Jesus Catholic Church. They shared 62 years of marriage before Bob preceded her in death in July, 2011. Together, they raised six children. Althea was the consummate wife and mother. She loved and supported Bob in all his activities and affirmed the gifts and talents of their children at every turn.

Althea shared her deep faith in God as a member of the Holy Name of Jesus Christian Mothers, a participant in weekly Bible study, a leader in the Cursillo movement in the Green Bay Diocese, a High School CCD Teacher, a member of the Good News Choir, a Eucharistic Minister, a Care Minister, a prayer partner at Holy Name School, and most especially as the founder of the Valley Area Special Needs Religion Education Program which she began in the mid 1960s. Althea felt God’s strong call to share her passion and love for Jesus and out of that call VASNRE was formed to provide religion education for children and adults with special needs. Althea created and developed the curriculum which is still utilized today.

As a valued and respected member of the community, Althea participated in the Kimberly Papermaker Booster Club. She was a member of American Legion Auxiliary William Verhagen Post 60. Althea was a charter member of the Holy Name Drama Club.

Althea and Bob enjoyed golfing in a couples league at Countryside Golf Course and playing cribbage with the “cribbage gang.” Althea was an avid reader and a lover of all music and introduced her children to playing the piano. She was a fan of sports of all kinds and followed the Brewers, Packers, and Badgers with great enthusiasm. Watching her children participate in athletics brought Althea great joy! Close to 40 years of cottage rentals in Summit Lake, WI provided many family memories.

Althea will be missed dearly by six children and their families:

Althea is further survived by her sister, Delphine Diermeier, King; a sister-in-law, Pat VandenBoom, Kimberly; a brother-in-law, Pete (Audrey) Valentyne, Kimberly; as well as many nieces, nephews, other relatives, and friends.

The funeral liturgy for Althea will be held at 12:00 Noon on Friday, August 18, 2017 at Holy Spirit Parish, 600 East Kimberly Avenue, Kimberly, with Father Scott Valentyn officiating. Interment will take place in the Holy Name Cemetery. Friends may call at the church on Thursday after 4:00 PM and again on Friday from 10:00 AM until the time of the liturgy. Visiting hours Thursday evening will conclude with a parish prayer service at 7:00 PM.
In lieu of flowers, a memorial fund is being established in Althea’s memory. Donations can be made to St. Paul Elder Services or Valley Area Special Needs Religion Education.

The family thanks Doctor Monk Elmer, the staff at Theda Care Physicians, Kimberly, and the wonderful care-givers at St. Paul Villa and Hospice Services, Kaukauna, for their compassionate care. The faithful prayers and support of the Holy Spirit Parish Family will never be forgotten.

Althea’s faith was the foundation for her life. Obediently using the gifts she was given, Althea nurtured relationships through conversation. She was a devoted wife, mother, grandmother, great-grandmother, and friend to many. Althea was deeply loved by those blessed to know her and will be greatly missed. Her legacy will live on in those who choose to love and serve as Althea did.

“And we know that in all things God works for the good of those who love Him, who have been called according to His purpose.” Romans 8:28