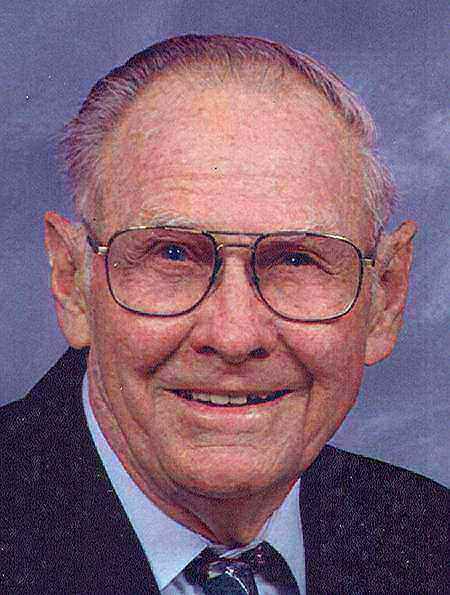 Alfred Gill was born on August 24, 1915 to Andrew and Margit (Dahl) Gill in the Town of Harrison, WI. He resided on the home farm until 1939 at which time he moved to Appleton, WI and began working as a farmhand and laborer. Alfred began a 46 year long career with Fox River Tractor/Koehring Company.

He proudly joined the US Army and served from April 9, 1941 to October 22, 1945. Alfred served in World War II in the Pacific Theater and returned home to marry the love of his life.

Alfred married Harriet Ethel Matson on June 1, 1946 at St. Paul's Lutheran Church in Wittenberg. They resided in Appleton their entire married life and raised their 12 children in the home they built together. They were married for 54 years, until God called Harriet home on March 13, 2001.

Alfred is survived by two sisters-in-law, Helen Spolarich and Irene Johnson, and many nieces and nephews. He was preceded in death by his parents, three brothers, Gilbert, Carl, and Hjalmer, and one sister, Martha Nymoen and their spouses, two grandchildren Danielle Gill and Kristofer Schroetter.

Alfred's vocational goal was fulfilled in making the life of a farmer easier through his work in research and development of farm implements. He held a life long love of, nature, and spent many seasons fishing, hunting, and gardening. His primary interest was his beloved Model T Fords which he and his wife restored and displayed at auto shows and competition. You may have seen them in Appleton‚Äôs Flag Day Parade.

Alfred enjoyed life-long learning and willingly shared his bountiful knowledge with others. He counted his many blessings and passed on a strong sense of family and faith. Alfred was skillfully cared for by the staff at the Neurospine Center, the Seikman Cancer Center and Cardiology departments at Appleton Medical Center, Manor Care Nursing Home, and Hospice at Cherry Meadows. He was called home to his Lord on August 20, 2005.

The funeral service will be at 10:30 am on Wednesday, August 24, 2005 at ZION LUTHERAN CHURCH, 912 N. Oneida St. with Rev. Larry Matthews officiating. Interment with military honors will be at Highland Memorial Park. Visitation will take place Tuesday, August 23 at the Wichmann Funeral Home from 4:00 ‚Äì 8:00 pm and Wednesday at the Church from 9:30 am until the time of service. A memorial fund is being established in his name.

"I have fought the good fight. I have finished the race, I have kept the faith. Henceforth there is laid up for me the crown of righteousness." 2 Tim. 3:7