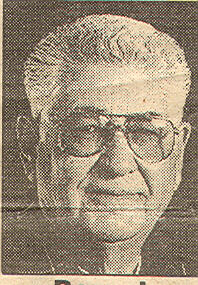 Alex passed away peacefully at Oak Ridge Gardens with his loving family by his side. Alejandro (“Alex”) Sanchez Bernal, 84, originally of Austin, Texas, and later of Menasha, Wisconsin, passed away on Wednesday, January 14, 2009.

He was born on August 29, 1924, in Austin, Texas, to the late Toribio Pe√ÖÀÜa Bernal and Francisca Sanchez Bernal of Austin. Alex was married to Adell Bernal of Menasha, Wisconsin. He was affectionately nick named “Güero”, “Alex” or “Al”. He has lived in Wisconsin for the past 40 plus years.

Alex retired from Ray's Tire Company in 2000 where he was shop manager after many years of employment with them. He was a welder for many years when he lived in Austin, Texas. Alex was proud of being a veteran of World War II. He received several medals and recognition during his service to his country. Alex has been featured in several local and Texas newspapers describing his bravery and service while serving with the United States Army. He was a long-time member of the Veterans of Foreign Wars, Harvey Pierre Post No. 2778, Appleton, Wisconsin.

Alex was an avid outdoorsman and enjoyed fresh-water and salt-water fishing, bird and game hunting. During the winter when the lakes would ice over, he especially loved ice fishing, and he could be found in his shanty on any given day. He also enjoyed snow mobiling.

Alex is survived by four daughters, Elizabeth Bernal Walton (Paul R.) of Dallas; Texas; Sheila Bernal Guzman (Samuel); Mary Alice Bernal Lopez (Ray); and, Terrie Bernal Sanchez (Michael) of Austin, Texas. He is survived by several step-children, one of whom he was very close to, Jim Morin of Boulder, Colorado. He is also survived by his wife's children who were very dear and close to him, Debbie Luko (Jeff) of Suring, Wisconsin; Luann Landers (Jim), Marvin M. Devries, all of Menasha, Wisconsin; and, Michael DeVries (Jodie) of Appleton, Wisconsin. Alex had 13 grandchildren and 10 great grandchildren.

Alex leaves many good friends in the Appleton-Menasha area that were very close to him and his wife, Adell. We will all miss him.

A memorial service will be held at Sacred Heart Catholic Church, 222 East Fremont Street, in Appleton, Wisconsin on Saturday, January 17, 2009, at 11:00 a.m. Father Robert Karuhn will preside over the Mass. Barbara Champeau, a close friend of the family, will be a featured soloist. A rosary will be held at 8:30 a.m. before visitation scheduled for 9:00 to 10:45 a.m.
In lieu of flowers, a memorial fund is being established.
Wichmann Funeral Home
Tri County Chapel
3212 S. Oneida Street
Menasha 831-9905
online condolences
www.wichmannfargo.com