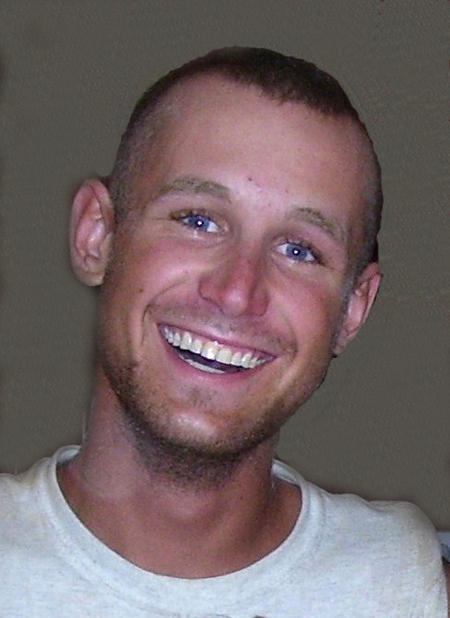 Alex John Sprangers, age 25, was a son, brother, father and friend. He died peacefully at his home on Saturday, April 28th, 2012, after a courageous seven month battle against cancer. He was born in Appleton on July 3rd, 1986 and attended St. Aloysius Grade School, St Mary's Middle School, and graduated from Kaukauna High School Class of 2005. Alex was a free spirit. He lived life to the fullest and he did it his way. His smile was contagious and he would light up a room. His beautiful blue eyes were a direct reflection of his soul. Alex had a kindness and gentleness to him that was without boundaries. He had an aura about him that would draw people to him, especially children. Whether it was the children he taught swimming lesson to, or his cousins at family gatherings, the children would always hang on him and at times it was hard to tell who was enjoying themselves more.

But the greatest love in Alex's short life, the one that gave him the most joy, was his beautiful daughter, Alexanndrea. She was his entire world and anyone who had the pleasure to see them together would see a love between a father and a daughter like no other. Even in his final days of battling cancer, nothing could bring a smile to his face as quickly as when he would open his eyes and see his daughter standing beside him, waiting to give daddy a kiss. Cancer may have taken his body, but it will never take away his spirit. His spirit is alive in the beautiful blue eyes of his daughter Alexanndrea, and in everyone whose life he touched.

A memorial service for Alex will be held at 5:00 PM on Sunday afternoon, May 6, 2012 at the Fargo Funeral Home in Kaukauna. Friends may call at the funeral home on Sunday from 2:00 PM until the time of the memorial.

Alex- You'll be in our hearts from this day on – now and forever more!

Everyone, please carry a little bit of Alex with you to make the world a better place.