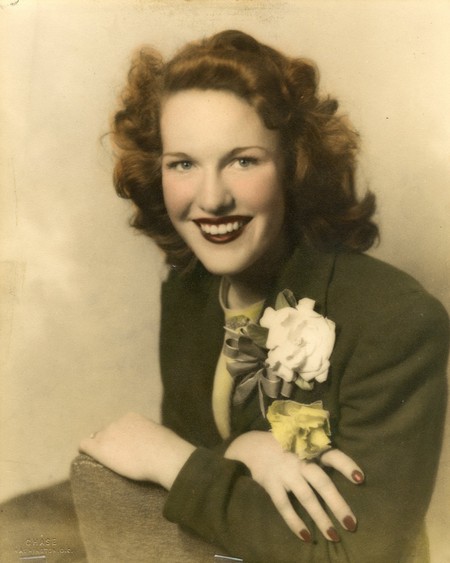 Dawson, Alethea Gardner, 9 November 1921 – 31 May 2013. It is with a deep sense of sadness that the family of Alethea Dawson announces her quiet passing at Cherry Meadows in Appleton, Wisconsin. “Lee”, as she was affectionately known by her friends and family, was born in Richmond, Virginia, the daughter of George C. and Itaska Gardner.
As a young woman during World War II, Lee worked as a secretary in the Virginia Governor's Office and in Washington, D.C. in the office of the Director of Industry Operations. Serving as a USO Hostess during that time was great fun for Lee because she loved to dance and talk with the soldiers who were away from home, many for the first time. Marriage to a Marine Corps officer had her moving numerous places on the East Coast, but in 1951 Lee moved to Vista, California where she devoted her time to rearing her children, co-chairing fund raisers for the American Red Cross at Camp Pendleton through the Officer's Wives Club, and being an active member of the Vista Junior Women's Club serving her community through volunteer service. In 1960, Lee returned to the workforce and became the Secretary to the Superintendent of the Vista Unified School District. In 1971, Lee changed jobs and moved to Chula Vista where she was the Administrative Secretary of Business Services at the Chula Vista City School District until she retired in 1981. After her retirement, Lee continued with her volunteer work by manning the registration tables at polling places during elections and delivering Meals on Wheels until her poor health forced her to stop. Lee had been a resident of Chula Vista for 34 years prior to moving to Kimberly, Wisconsin in 2005.
Lee was a woman of deep kindness and generosity, fierce loyalty and a vivacious spirit. It is a great testament to her nature that she formed so many long-lasting friendships over her lifetime. She will always be remembered for her gracious manner, sharp intelligence and soft southern accent. Her real passion in life was making quilts and she was an active member of the Chula Vista Quilt Guild before moving to Wisconsin. Lee leaves behind an impressive legacy of exquisite award-winning heirloom quilts. Even now, she is sure to be setting up her quilt frame in Heaven as she always said the light would be very good up there.
Lee will be lovingly remembered by her daughter, Rebecca Pearson (John) of Kimberly, WI; son, Robert Dawson (Naomi) of Reno, NV; granddaughter, Debra Vieira (Rob) of Vancouver, WA; grandson, Michael Pearson of Appleton, WI; great-granddaughters, Anna Kelley and Addy Vieira of Vancouver, WA. Lee is also survived by her much loved younger brother, Joseph Gardner (Fay) of Richmond, VA; niece, Pam Bishop (Ed) of Montpelier, VA; and nephew, Jay Gardner of Richmond, VA.
A private graveside service will be held at Lee's family burial plot in Richmond, VA. The family wishes to thank all of those who cared for Lee at Cherry Meadows, Peabody Manor, The Heritage, ThedaCare at Home Hospice and Home Instead Senior Care, they are all truly angels on earth. In lieu of flowers, a donation may be made to the American Red Cross (redcross.org or 1 800 Red Cross). The finest memorial, however, as Lee would have said, is to be remembered with love and affection in the hearts of those who have known you. Online condolences can be offered at www.wichmannfargo.com.