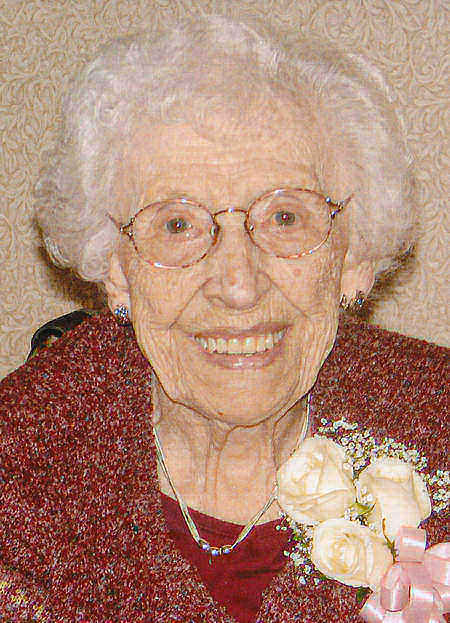 Aleda A. Helm, age 93, of Appleton, passed away on Thursday, January 26, 2012, at Cherry Meadows Hospice. Aleda was born on November 20, 1918, in Weyauwega, Wisconsin, to the late Reinhardt and Anna (Mittlestadt) Radtke. She married Clarence Helm on September 16, 1939, in Weyauwega; he preceded her in death on September 16, 1992. Aleda was a longtime member of St. Paul Ev. Lutheran Church and the Ladies Aid. She enjoyed knitting, travel and especially time spent with her grandchildren and great grandchildren. Aleda was a switchboard operator at Memorial Hospital in Appleton and at the Brillion Telephone Company. Survivors include her sister, Carolyn (Bob) Wagner, Neenah; her grandchildren, Julie (Todd) Maney, Whitelaw; Jill (Rick) Eiles, Whitelaw; Robbie (Sara) Kvitek, Green Bay; Judy (Dave) Gross, Auburn, Washington; and Jackie Helm, Touchet, Washington; her great grandchildren, Parker Maney, and Sam and Ben Eiles; daughter-in-law, Joan Helm, Waitsburg, Washington; her son-in-law, Robert Kvitek, Menchalville; and her sisters-in-law, Pat Radtke, Kimberly; and Rae Marie (Jim) Steinfest, Brillion. She is further survived by many nieces, nephews, other relatives and friends. Aleda was preceded in death by her daughter, Nancy Kvitek; her son, James Helm; her brother, Allen Radtke; her sister, Beata (Norman) Depner; her brother-in-law, Ronald Helm and her great grandson, Trace Kvitek. Funeral services will be at 11:00 a.m. on Tuesday, January 31, 2012, at ST. PAUL EV. LUTHERAN CHURCH, 302 N. Morrison Street, Appleton, with Rev. Kenneth L. Frey and Rev. Donald Ninmer officiating. Friends may call at the Wichmann Funeral Home on Monday from 4:00 p.m. to 7:00 p.m. and again directly at the church on Tuesday from 10:00 a.m. until the time of services. Entombment will be in Highland Memorial Park, Appleton. The family would like to extend a sincere thank you to the staff at Appleton Retirement Community, her special friend, Lynn Barrett and her cousin, Barb Bishop, for their loving care.

A daughter, a sister, a wife, a mom, a cousin, an aunt, a mother-in-law, a grandma, a great-grandma and a friend