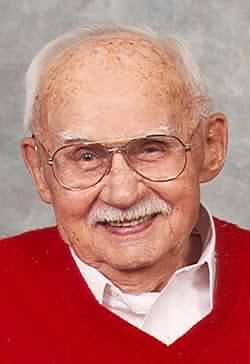 Age 102, passed away on Tuesday, June 29, 2004 at St. Elizabeth Hospital in Appleton. In the last 9 years he made his home with his daughter and son-in-law Joyce and John Fritz in Darboy. He was born on April 4, 1902 in Germany the son of the late Henry and Henrietta (Meyer) Schlewitz. Albert came to this country at the age of 21. On October 3, 1929 he married Violet L. Arhelger in Oshkosh. They celebrated 57 years together. Albert and Violet lived in Oshkosh and moved to Combined Locks. Albert worked in Oshkosh for Ganther and Fleur Brothers Construction Companies; and Combined Locks Paper Company as a construction foreman. Albert retired in 1967. He was a faithful member of Immanuel United Church of Christ in Kaukauna. He gave many hours of volunteer service to the congregation; and enjoyed gardening, fishing, shuffleboard, dartball, and playing sheepshead, and especially loved reading Western novels. He will always be remembered as someone who could fix anything; and he always had a smile for anyone and loved to tell stories to his grandchildren and great grandchildren about his past in this country and Germany.
He is survived by his two daughters Shirley (Clifford) Johnson of rural Kaukauna, and Joyce (John) Fritz of Darboy; ten grandchildren: Bruce Johnson, Tim (Kristi) Johnson, Brian Johnson, Jeffrey (Jayne) Fritz, Jeanne (Ron) Kilsdonk, Jill (David) Meier, Jay (Marion) Fritz, Jacqueline (David) Van Krey, and Jonathan (Vonnie) and Jason (Rose) Fritz; seventeen great grandchildren: Daniel and Aaron Johnson, Jennifer and Jaclyn Fritz, Matthew and Samantha Kilsdonk, Nicole, Brittany, Megan, and Travis Meier, Drew Fritz, Ryan, Aaron, Lauren, and Seth Albert Van Krey, and Tyler and Kaitlyn Fritz.
Albert was preceded in death besides his parents by his wife Violet in 1987, a grandson Gary Johnson, six sisters and three brothers, and a special friend Mae Buetow.
A funeral service will be conducted on Saturday, July 3, 2004 at 1:00 PM at Immanuel United Church of Christ, 510 Sullivan Avenue in Kaukauna with the Rev. Melinda Feller officiating. Interment will take place at Union Cemetery in Kaukauna. Friends may call at the church on Saturday from 11:00 AM until the time of the service. A memorial fund is being established for Immanuel United Church of Christ.