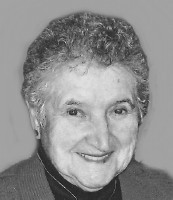 Agnes T. Van Heuklon, age 89, passed away on June 25, 2012 at St. Elizabeth's Hospital in Appleton. She was born on May 7, 1923 in Appleton, the daughter of the late Joseph and Julia (Becher) Stoffel. On May 2, 1946 she married Lawrence Van Heuklon. He preceded her in death on February 7, 1998. She was a lifelong member of St. Joseph Catholic Church. In her younger years Agnes had her own band named Aggie's Trio where she enjoyed playing the accordion. For over 38 years Agnes worked at the VFW frying fish. She loved when her family would come and visit her, whether they stopped in for her cooking, to play Sheephead or for the shake of the day; everyone found time to come and visit.
Agnes is survived by nine children: Barbara Reinke, Ron (Marlene) Van Heuklon, Suzanne “Sue” (Tom) Lemmens, Mike (Laura) Van Heuklon, Linda Van Heuklon, Randy Van Heuklon, Bob (Judy) Van Heuklon, Mary (Dick) Torbeck, and Tom Van Heuklon; 23 grandclidren, 21 great-grandchildren, and one sister Marcella “Sally” Schroth. She is further survived by nieces, nephews, other relatives and dear friends. Agnes was preceded in death by her husband, Lawrence; five sisters: Beatrice Blazek, Lorraine Blazek, Theresa Frahm, Julianne Vissers, and Mary Neuman; three brothers: Joseph Stoffel, George Stoffel, and Raymond Stoffel; and two grandchildren: Nick Van Heuklon and Diana Sievers.
Funeral Liturgy will be held at 11:00 AM on Thursday, June 28, 2012 at St. Joseph Catholic Church, 410 West Lawrence Street, with Father David J. Funk OFM. CAP officiating. Friends and family may call TODAY Wednesday, June 27, 2012 at Wichmann Funeral Home, 537 North Superior Street, from 4:00 PM until 7:00 PM with prayer service held at 7:00 PM. Friends and family may call at the church on Thursday June 28, 2012 from 9:00 AM until the time of Mass. Burial will take place at St. Joseph Catholic Cemetery in Appleton. Online condolences may be expressed at: www.wichmannfargo.com
A special thank you to Agnes' daughter Linda who gave extra care and love in taking care of our mother.