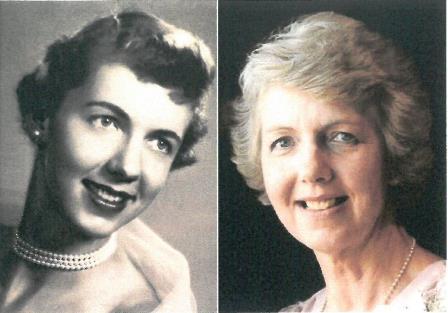 Agnes’ funeral may be viewed via Livestream by visiting this page on the day of the mass.

Agnes was born the youngest of four daughters in Appleton on April 22, 1930 to Peter and Caroline (Lamm) Jochman.  She lived on the family’s Greenville farm which, years later, was acquired by the Institute of Paper Chemistry.  At Saint Mary of Immaculate Conception Grade School in Greenville, Agnes demonstrated her precocious nature by skipping the second grade.  At Appleton High School, she finished in the top ten percent of the Class of 1947.  After graduation, she spent almost nine years doing office work for companies in Appleton, Miami and Milwaukee.

After meeting and courting in Milwaukee, Agnes Jochman and Donald Witeck were united in marriage in 1956 at St. Therese Catholic Church in Appleton.  After 62 wonderful years of marriage, Don preceded her in death in 2018.  Their marriage was blessed with three children: Carol (David), Catherine (John) and Daniel (Nancy).  They were also blessed with five grandchildren: Lauren, Jonathan, Benjamin, Emily and Zachary.

In 1963, Agnes and Don were founding members of St. Thomas More Catholic Church.  Over the years, they served the parish in many ways, including Agnes’ leadership in Christian Mothers.

When her children were older, Agnes returned to the workplace at Gimbels on College Avenue in Appleton.  And for almost 20 years, the store’s best customers – new and old – sought out her recommendations in the Better Dresses department.

Agnes was a lifelong, accomplished bridge player.  She loved to travel and organized family driving trips to an amazing number of the country’s most historic sites.  Later in life, she traveled with her husband and adult children and ultimately on bus tours sponsored by the Appleton YMCA and other groups.

Agnes always enjoyed being with her grandchildren in Appleton, as well as at their homes in Winnetka, Illinois and Menlo Park, California.  With them, she loved watching the Packers games, baking her signature brownies and playing Sheepshead.

Inspired by her beloved sister Theresa Block’s good life at Valley VNA in Neenah, last year Agnes moved to an apartment there from her home in Appleton.

A Funeral Mass will be celebrated for Agnes at 11 AM on Friday, February 26, 2021 at St. Thomas More Catholic Church, 1810 N. McDonald St., Appleton, WI 54911. Family and friends may visit at the church from 9-11 AM.  Entombment will follow in St. Joseph Cemetery, 1815 E. Wisconsin Ave., Appleton.  The mass may be viewed via Livestream by visiting this page on the day of the mass.

In lieu of flowers, a memorial fund is being established in Agnes’ name.

A special thank you to Valley VNA for the care and support they provided to Agnes and her family.

Please leave a special message or condolences for Agnes’ family below.

Agnes’ funeral may be viewed via Livestream by visiting this page on the day of the mass.