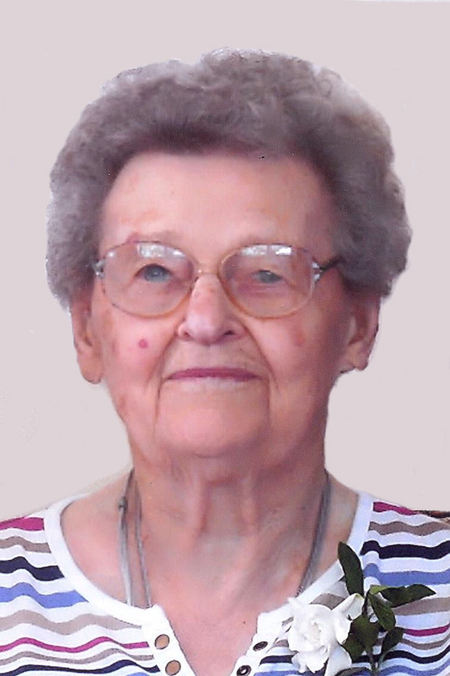 Our beautiful and sweet mother, Agnes Jock, age 97, became our angel in heaven on Monday, September 16, 2013, at St. Elizabeth Hospital in Appleton. On August 9, 1916, in Armstrong Creek, Wisconsin, Nellie and Vincent Kopka were blessed with their eighth child. That child was Agnes who grew up to be a hardworking, loving, compassionate and selfless daughter, sister, wife, mother, grandmother and great grandmother. On August 8, 1942, Agnes married the love of her life Wadsworth Jock at St. Stanislaus Catholic Church in Armstrong Creek. The couple lived in Chicago, Popple River and settled in Argonne, Wisconsin. Agnes and Wadsworth owned and operated Argonne Cash Market for 22 years and retired there. After Wadsworth's death in 1997, Agnes remained in Argonne until moving to Sherwood, Wisconsin, to be closer to her daughters. Agnes is survived by her daughters, Elaine (Douglas) Bessette; Patricia (Peter) Hurlbut; and Arlene (Dennis) Gebhart; her grandchildren, Stephen (Wendy) Bessette; Krisopher Bessette, Michael (Shannon) Hurlbut, David (Desiree) Hurlbut; John Hurlbut (special friend Katie); Angela and Sara Gebhart; her great grandchildren, Evan and Stephanie Bessette; and Cameron and Ross Hurlbut. She is further survived by her sister, Helen Waliczek of Rolling Meadows, Illinois. She was preceded in death by her parents; her sisters, Anna Styzinski, Mary Kowalski, Emily Wolnik, Rose DeLongchamp, Betty Kille; and her brothers, Alexander, Frank, Walter and Ben Kopka.

The Funeral Liturgy will be at 11:00 a.m. on Thursday, September 19, 2013, at SACRED HEART CATHOLIC CHURCH, N369 Military Road, Sherwood, with Fr. Michael Betley officiating. Friends may call directly at the church on Thursday from 9:00 a.m. until the time of services. Interment will be in St. Mary Cemetery, Argonne, Wisconsin. Online condolences may be offered at www.wichmannfargo.com

Mom, your family is so proud of everything you were and we have been truly blessed to have you in our lives. Your time with us seems so short and we are sad that you did not reach that 100th birthday you dreamed of having.