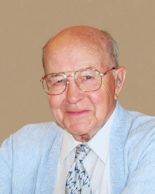 Adolf L. Hendriks “Opa”, age 94, of Appleton, passed away with his family by his side on August 16, 2012 at Cherry Meadows Hospice in Appleton. He was born on March 1, 1918 in Teteringen, Netherlands, the son of the late Adolf and Cornelia (Thijs) Hendriks.

On April 30th, 1943 he married the former Antonia Van Belkom in Tilburg, the Netherlands. Adolf served in the Dutch Armed Forces during World War II and came to the United States with his wife and sons in 1961. After working as the Bakery Manager at the Quaker Dairy Company from 1961-1984 he pursued his hobbies of gardening, making wicker furniture and adventurous walking throughout the city while maintaining his passion of baking with Manderfield's Home Bakery into his later years. Adolf enjoyed several trips back to the Netherlands to visit family and friends.

His home baked delights and family gatherings made the holidays so special for everyone. His hearty laughter and tales of the old country will live on in the hearts of everyone who had the privilege to know him.

Visitation will be held at 9:30am prior to Catholic Mass services on Tuesday, August 21th, 2012 at 11:00 AM at St. Bernadette Catholic Church, 2331 E. Lourdes Dr., Appleton. Father Don Zuleger will officiate. Burial will be in the Appleton Highland Memorial Park.

Our family greatly appreciated all the wonderful care given to our Dad and would like to thank the caregivers at Cherry Meadows, Carolina Manor and Doctor Alan Cherkasky.

A memorial benefiting the Honor Flight of World War II Veterans has been established by the family.