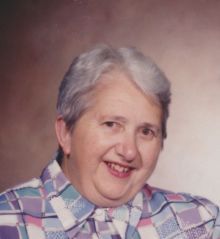 Adeline “Addie” Ulman, age 85, of Appleton, passed away on January 30, 2014, at Cherry Meadows, Appleton. Addie was born on Memorial Day, May 30, 1928, in Mackville, Wisconsin, the daughter of the late Dorothy (Tennie) and Frank B. Nussbaum and was the wife of Ralph G. Ulman. She attended grade school in Mackville to the mid-fifth grade, when she moved to Appleton an attended St. Joseph school through Grade Nine. Addie graduated from Appleton High School (West) in 1946. She was a very active member of Don Bosco Guild from 1946 to 1961. Addie worked at the H. C. Prange Company in Appleton from June 1946 until May of 1970. On September 16th, 1961, Addie married Ralph Ulman at St. Joseph Church in Appleton. In June of 1970 they moved to Danbury, Connecticut, where they lived until February of 1991 when Ralph retired from James River Corporation and they moved back to Appleton. Addie was a Minister of Hospitality, Tuesday Morning Sacristan and Eucharistic Minister, and served at funeral lunches at St. Joseph Church. She and Ralph were weekly participants in the Living with Cancer Support Group at St. Elizabeth from June of 1996 until the organization disbanded.

The Funeral Liturgy will be at 3:00 p.m. on SUNDAY, February 2, 2014, at ST. JOSEPH CATHOLIC CHURCH, 410 West Lawrence Street, Appleton, with Fr. Jim Leary, O.F.M. Cap. officiating. Friends may call at the Wichmann Funeral Home, Appleton, on Saturday from 2:00 p.m. to 6:00 p.m. and directly at the church on SUNDAY from 1:00 p.m. until the time of services. Interment will be in St. Joseph Cemetery. A memorial has been established in Addie's name to benefit St. Lawrence Seminary at Mt. Calvary, Wisconsin. The family would like to extend a sincere thank you to the staff at St. Elizabeth Hospital and the staff at Cherry Meadows, for their loving care. Online condolences may be offered at www.wichmannfargo.com