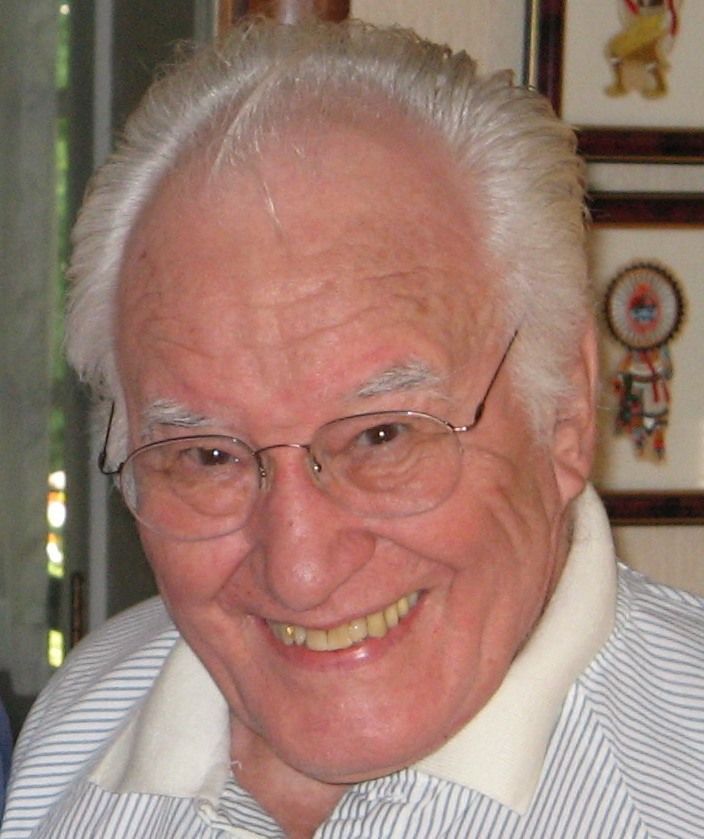 A. Harold Martin “Hal”, 92, of Appleton, passed away in his sleep on Sunday, September 7, 2014. Hal was born on his maternal grandparent's farm, near Bloomer, Wisconsin on December 27, 1921 the oldest son of Arthur & Nettie {Vahlenkamp} Martin's two sons. He was a devout member of the Lutheran church and held positions on the church councils of a number of churches including Trinity Lutheran in Appleton.

With war looming, Hal enlisted as an Ensign in the US Navy and began Officer's training school, followed by electronics training in specialized and secret equipment at Harvard and M.I.T. He proudly served until he was honorably discharged to inactive duty in 1946. Hal immediately enrolled to the University of Wisconsin graduating with a Master's of Science in Chemical Engineering – completed his thesis on The Production of Bleached Eucalyptus Pulp, which lead to his career in the paper industry.

After graduating Hal accepted a job with Scott Paper Company in Chester, Pennsylvania, working in several different Scott mills. He was sent to Ft. Edwards, NY to develop and conduct research on waxed paper. While working there he met his bride-to-be, a charming red-headed Irish grade school teacher from Glens Falls, NY, named Angela. They were married on July 22, 1950. In the fall of 1957, Hal left Scott Paper Co. and joined Thilmany Pulp and Paper Company in Kaukauna WI to work as the Paper Mill Division Manager. Hal worked almost thirty years for Thilmany, many as Manager of Environmental Control.

Hal lived in Appleton with his family where he enjoyed traveling with his family, both locally and internationally, fishing with a fly rod, tying flies, golfing, piloting airplanes, walking their dogs, and reading. Hal was called a “book worm” at a very early age as he seemed to have his nose constantly in a book or magazine. He continued his love of reading throughout the years – ensuring that he read every article in the Wall Street Journal on a daily basis. Hal considered reading as the opportunity to learn and gain experiences. He was a profound lover of music, especially classical and jazz. He played the clarinet in the Bloomer school bands and in the UW marching band. He spent quality time with his children and grandchildren playing board games and cards.

Hall will be sadly missed by his family and friends, including his beloved wife of 64 years, Angela, his son Bill, wife Rocky (Roxanne) and grandson T. Colin; his daughter Mary Martin Merisalo, husband Carl and grandsons, Chris and Kerry; his daughter Sandra Martin and grandson, Will Chaloner; his son John, wife Judy; his granddaughter Marissa Martin Schrader, husband Kirk, as well as his brother Norbert Martin, wife Lucille (Luce), and their children Rodney, Craig, and Susie; his sister-in-law, Mary Alice Nolan; his brother-in-law, Dennis Nolan, wife Jeannine and their daughter Ruth.

Hal was preceded in death by his parents and his oldest son, Andrew Harold Martin Jr.
A Memorial Service will be held at Wichmann Funeral Home, Superior Street location on Saturday September 13, 2014 at 4:00 pm with Rev. Brian Bankert officiating. A gathering of family and friends will be at the funeral home on Saturday from 3:00 to 4:00 pm. For more information and to express condolences, please visit the online guestbook at www.wichmannfargo.com.

The family would like to thank the staff at Willow Lane, Heartland Hospice and Sally for their compassion and care. In lieu of flowers a Memorial Fund has been set up for contribution to some of Hal's favorite charities.